The Ancient tradition of sculpting stones in Huila traces back to the giant stone sculptures which today make up the San Agustin Archaeological park in Huila.The massive monuments representing gods and mythical beings were discovered in ancient burials, the first mention of them was in 1757. Even at the time they were first encountered, those responsible for their creation had long left the area, it is still unclear who they were and why and where they went.

This ancient tradition carries on in Huila where local artisans still collect beautiful rocks from the Magdalena river and carve them into household items such as grinders and bowls or simply sculpt them to reveal the vibrant natural colors and contrasts in the stones.

Each one of our sculpted stones is unique and carries with it all the energy and magic of the Magdalena river.

There are no reviews yet.

Only logged in customers who have purchased this product may leave a review. 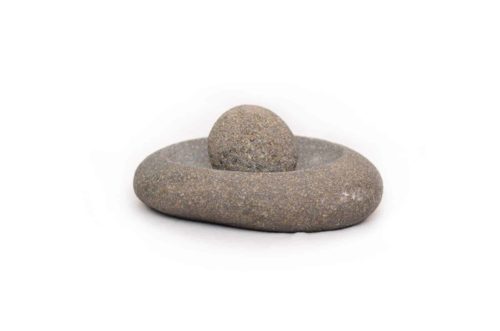 You're viewing: Dark Carved Stone Bowl + Polished Dark Stone- CPL010 $31.00
Add to cart
We use cookies to ensure that we give you the best experience on our website. If you continue to use this site we will assume that you are happy with it.Ok